Who Will Win The App Store Race?

The launch of the Apple App Store in 2008 has started an app store race leading to 34 major application stores and hundreds of niche stores in 2009.
Although smartphone applications have been live since 2000, the race for market dominance truly began in 2009 after the success of Apple’s App Store. Before the Apple App Store launch, smartphone applications have been sold next to other digital content like ringtones and wallpapers by mobile operators (MNO) and independent stores, but were not gaining much attention outside the mobile industry. Now the market dynamic changed dramatically with big players rushing into the market. 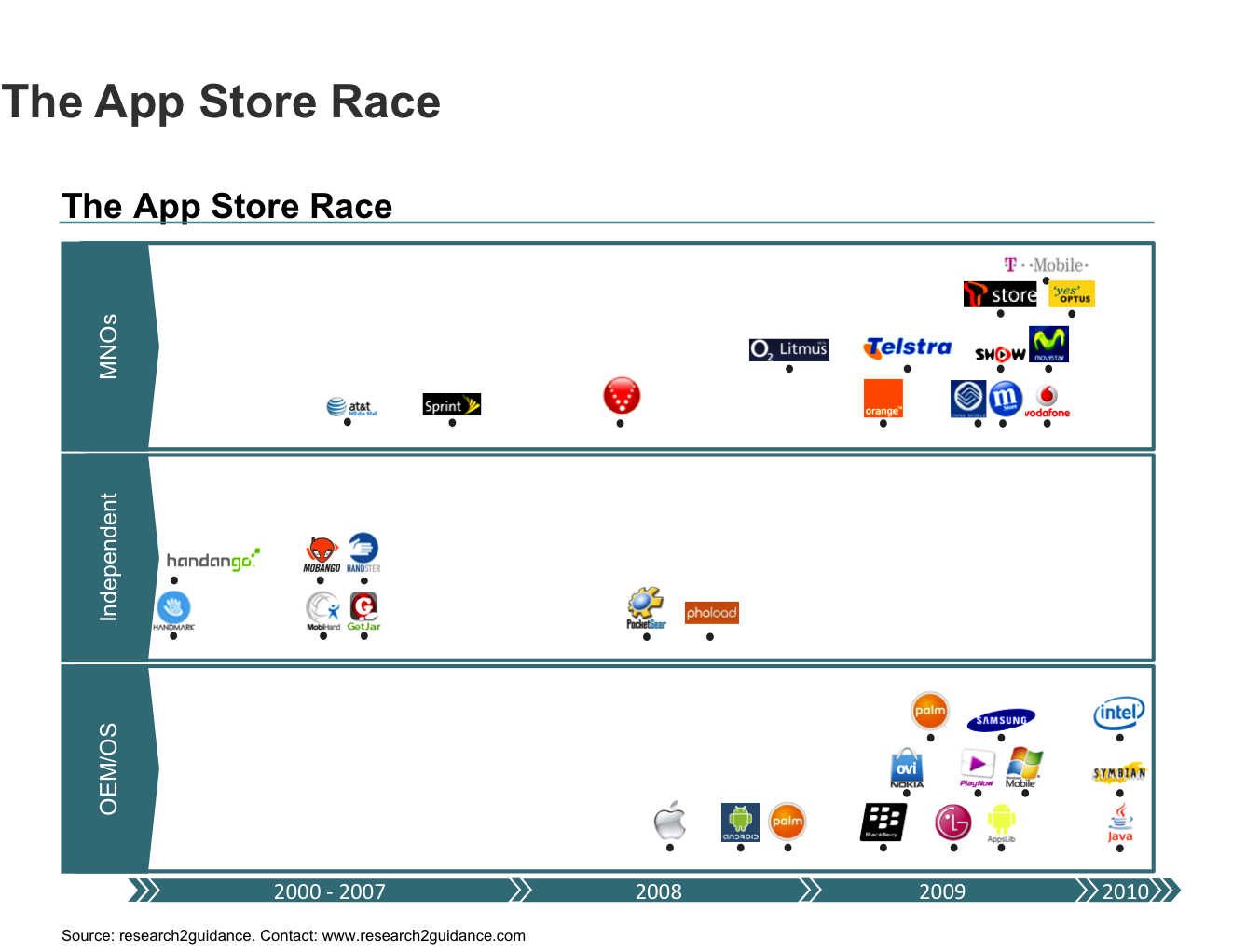 Development of the smartphone apps market

The question is how this market is going to develop and who will win the app store race?
Today the market is dominated by the top five application stores, representing 96% of the market’s downloads, with Apple alone responsible for 77% of the all downloads (2009). There is a long tale of app stores which have not been able to generate significant download numbers because of the following reasons:
1. Reach: the reach of the app store is still too little
2. No marketing push: Only a few stores manage to draw public attention to their stores. It seems that some of the stores prefer a soft launch rather than a big bang
3. Lack of developers: Choice of applications is very limited

Scenarios for the smartphone apps market

The market is still in its early stage and it is most likely that the market will look differently in three years time. The following market scenario seems to be most likely:
1. Companies from all different industries will learn that smartphone apps are a great tool to reach their customers. These companies will use app stores as their main distribution platforms. As a consequence the number of app publishers will increase significantly. For many companies, having a smartphone app will become just as essential as their corporate webpage.
2. Smartphone handset manufacturers understood that apps are a critical selling argument for their devices. They will distribute each new handset with a pre-installed app store.
3. The mass of mobile operators will focus on smartphones with pre-installed app stores as a vehicle to sell data tariffs to high ARPU customers.

Consequently there will be millions of apps, app stores will be on every smartphone and smartphone will become the normal mobile device at least in some regions like North America, EU and Asia. Smartphone shipment will be the main driver for the reach and success of an app store.
The users will mainly use the pre-installed app stores to explore the world of applications. This clearly puts the OEMs, OS and large MNOs in the pole position in the app store race. App developer will eventually follow the reach and submit their apps to the app store which offers the highest download numbers. Not surprisingly Nokia, Blackberry, Samsung and Google will become the top challengers of the Apple App Store in the coming years

Independent like GetJar, Handango and Mobango have benefited from the Apple App Store hype with increasing download numbers but now fear to be squeezed in the middle between OEM/OS and MNOs.
Most of the analysts see no future for independent stores, and with the acquisition of Handango by GetJar there are already first signs of consolidation, but within the growing market we think that there is room for independent app stores. This positive outlook is based on the fact that they have been able to learn how to sell mobile applications over many years. All other players are rather new to the party. Their advanced know-how is centered around the key word: app discoverability (for more details see research2guidance App Store Ranking 2010). With the growing number of app stores reaching +20.000 apps, the ability of an app store to make apps visible will be critical. Nevertheless the market share of independent stores will decrease and they will change their business focus to providing white label solutions for new app stores.
Niche stores will try to capitalize on targeting a specific customer segment. Today most niche stores are concentrating on a specific technology platform (e.g. Android, Palm, Blackberry, Symbian). In the future more and more niche stores will concentrate on a specific customer segment or application type (e.g. business apps, adult apps) or region.

The rising competition will also affect Apple’s dominant market position. Apple will most likely still be the biggest market place in 2013 but will lose its dominant role.
At the end any app publisher can benefit from this development. The app store race means a much broader choice of distribution platforms for their products. Multi-platform publishing will be the key challenge in 2010 and beyond. Any app publisher will have to know the pros and cons of each platform in order to make the right decision on where to publish an app.