The number of new tablet app consumers increased by 58 million. As a result, tablet owners now constitute 8.6% of the installed app consumer base. 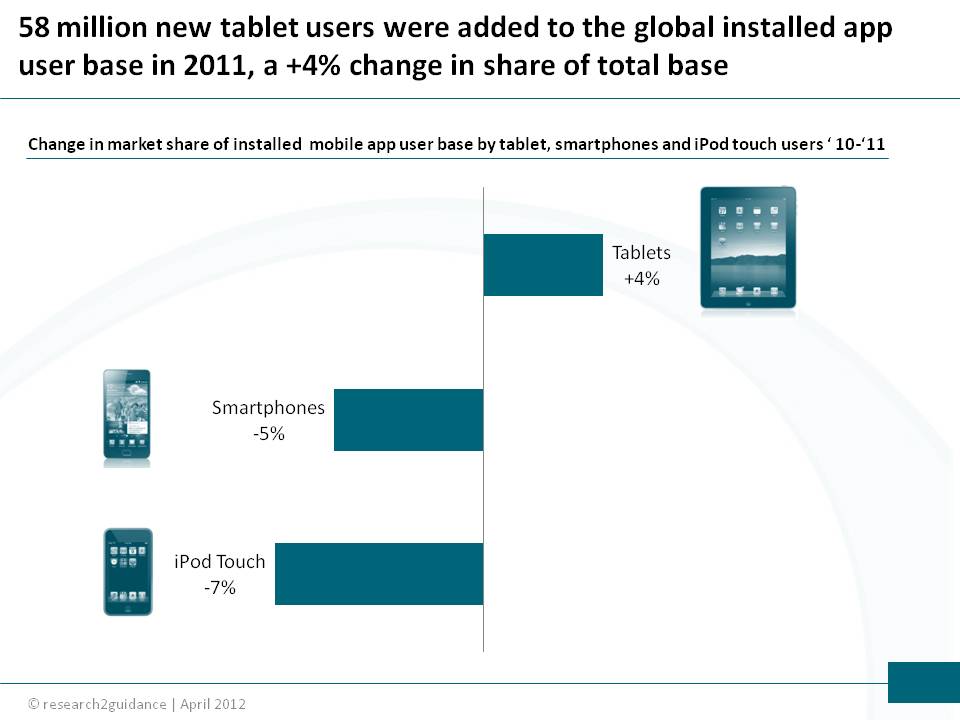 Based on Q2 projections for tablet shipments in 2012, the installed base of tablet users is set to increase more than 150% by 2013. As tablet users become a larger and larger app downloading segment, their app behavior and preferences will have an increasing influence on the app market — illustrated already in the growth in the number of apps and stores devoted to them.

During 2011, apps in the Apple App Store for iPad grew 180% to more than 140,000 apps by the end of Q4 2011. While this cannot be easily quantified for Android as tablet apps are not separated out, the growth of niche stores and niche store categories focusing on Android tablets reflects their growing presence. For example, Archos Appslib focuses completely on Android tablet apps, while other stores like Android Tapp has a dedicated category.

Several studies have shown that tablet users exhibit different behaviour towards app downloading/usage and mobile browsing than smartphone users. Based on the breadth of use cases for gaming, ecommerce, digital publishing and the enterprise — tablet user growth is likely to have a marked effect on consumption in these areas.

Tablet apps for the enterprise market

In the enterprise, for example, tablets have already been largely implemented at upper levels of management and are quickly working their way throughout organizations — according to Apple’s CEO Tim Cook in 2012, 92% of Fortune 500 companies are testing or deploying iPads. As more and more use cases are developed and penetration increases, so too will the number of apps being developed for enterprise tablet users. While Apple has already carved out a niche section for iPad and iPhone Business users called “@Work”, other players like Lenovo and Cisco are trying to do the same for Android Business users.

What do you think — how will the growth in the installed base of tablet users impact the mobile apps market? Which app categories do you think will be most impacted?

To find out more about the growth in the market for mobile apps check out the latest Smartphone App Market Monitor —Vol. 5 Q4 2011 with a special comparison of mobile and app market growth between 2010 and 2011. The report comes in different versions: As a PDF Report, as a set of PPT Slides, as a Bundle (PDF & PPT) package, or as a One-year subscription.

Please also have a look at our single PPT slides, starting at 9â‚¬:

– Number of applications per mobile platform