The mHealth Economics 2017 Report is out.
Download the report for free!

Successful free Android mHealth apps in both categories – Health & Fitness and Medical – reach significant higher downloads than Apple apps. Health & Fitness apps that were listed in the top 10 between December 2012 and February 2013 managed to generate 238.000 downloads on average since they have been on the market.

The following graph illustrates the average accumulated downloads of free apps that have been listed in the top 10 in the Health & Fitness app category during the analysis period. 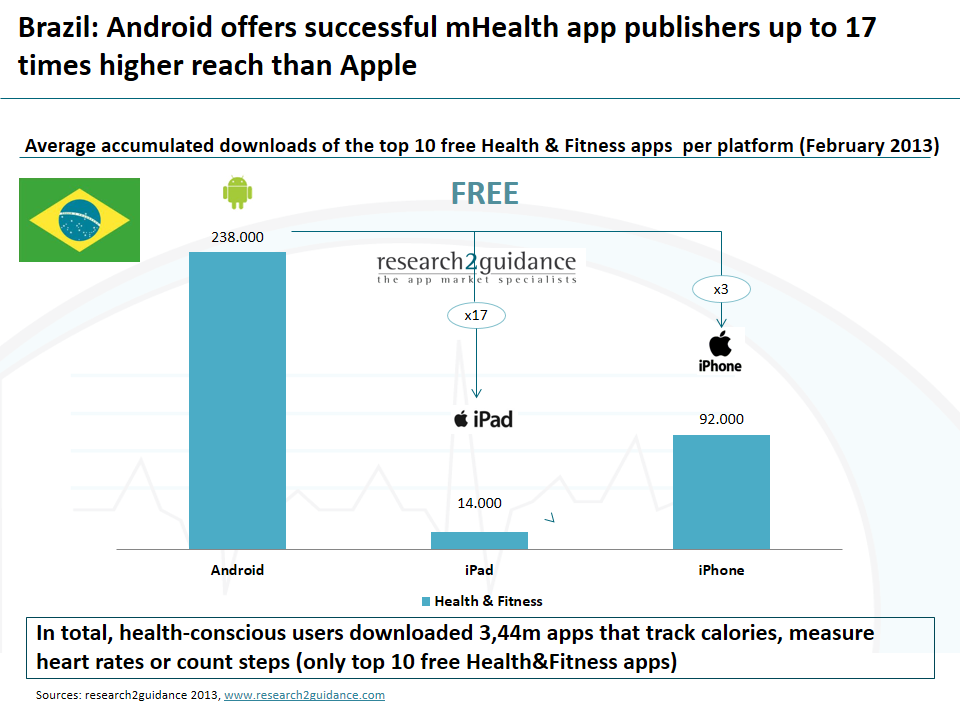 The Health & Fitness app market is still a niche market if you compare it with the average download number of top 10 apps in the game or entertainment sections of the app stores. This is especially true for apps that are being listed in the Medical sections (see Brazil Top 10 mHealth App Performance Benchmarking Report for more details).

On the other hand if all downloads from the top 10 apps from both Android and iOS are summed up, the reach becomes more impressive. In total, health-conscious users downloaded 3,44m apps that track calories, measure heart rates and count steps. This does not even include top 10 Health & Fitness apps that have been in the top 10 e.g. a year ago or paid apps, or apps long tail Medical apps.  This shows, that even in so called emerging countries, mobile apps became a channel to health-conscious users and patients that can’t be neglected.

Similar to the US and the German mobile health market, apps that are listed in the Health & Fitness category attract significantly more iPhone, iPad and Android users than apps in the Medical category. One reason for the performance gap of paid apps is the 4 times higher pricing level of Medical apps.

The Brazilian mHealth app market seems to offer higher chances for local apps to reach the top 10 than other Western app markets. However global mHealth players like Runtastic also rank amongst the top 10 in Brazil with some of their apps.

This analysis is part of our new series of benchmarking reports starting with USA and Germany. In our benchmarking report series, which compares  the app market performance amongst the most successful mHealth apps on the iOS and Android platforms,  we will be publishing reports about Japan and UK soon.

As always, comments are very welcome.