With 3.49 billion total downloads as of September 2011, the US is still the largest market, holding more than 50% of the total app download market share, but not the most active market and not the one with the highest potential.

The United States remains one of the largest markets, both in terms of user base and, consequently in terms of volume of apps downloaded. Android smartphone users, based in the US, have generated over 50% of all Android app downloads, totaling nearly 3.5 billion.

South Korea, the second largest market in terms of app downloads, lags behind with a mere 9% share of the total Android app downloads from the Android Market; followed by United Kingdom, Germany and France.

US not the cash cow market for mobile applications

Yesterday’s news? So let’s have a look at something different: Obviously users based in the largest Android markets are not necessarily the most active app downloaders. If we take a look at the average app downloads per smartphone user we see that the cash cow markets also are to be found elsewhere.

User download behavior differs significantly between markets. Sweden has a low level of Android smartphone penetration but user behavior reflects a high interest in apps. The Netherlands, Germany, Switzerland and Spain follow slightly behind. Comparatively, Russian, Japanese and Chinese subscribers are among the most passive downloaders. 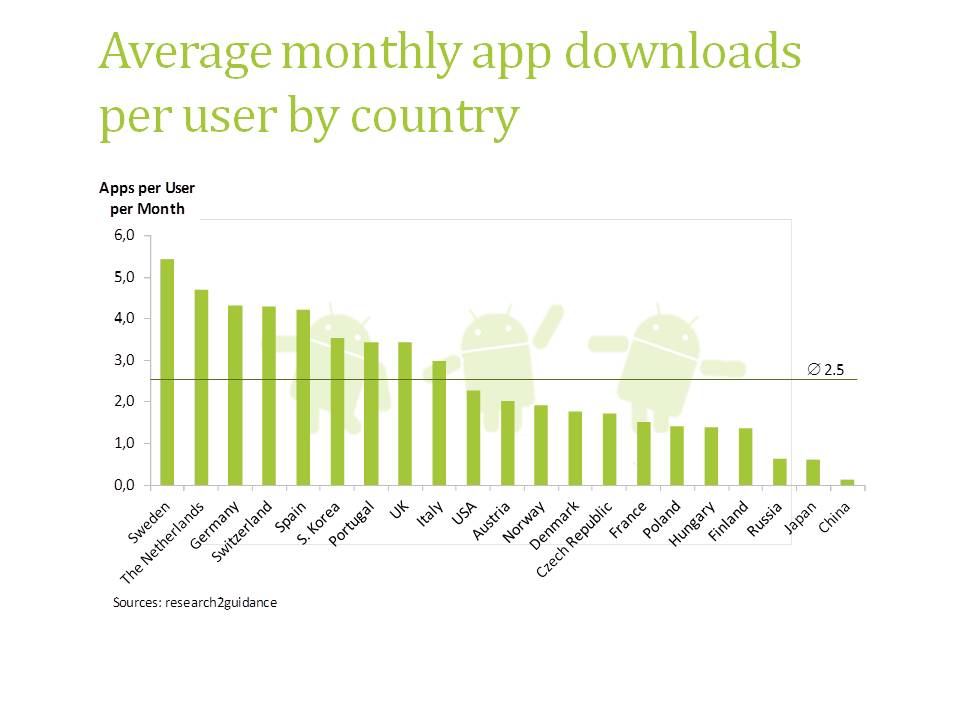 The average user in major Android markets downloads 2-3 applications per month. Higher average downloads per smartphone user show the market’s rate of absorption and growth potential. In other words, higher numbers of per smartphone user app downloads demonstrates a society’s openness toward new apps. Thus, the growth rate of total app downloads in these countries is likely to increase with less marketing efforts, compared to countries with less active users.

Grouping the above countries along two dimensions: the number of downloads per smartphone user and the level of android smartphone penetration, four types of environments for app market growth emerge:

For more detailed information on the environment for app growth in different countries, download our free Android Market Insights Vol. 7.