As one of the last times, the companies from the global mobile eco system met during the Mobile World Congress in Barcelona from February 14 to 17, 2011. The attendance was a record breaking 60,000 visitors. The event has shown some interesting news which will impact the mobile app market. Here’s a review of the GSMA Mobile World Congress in Barcelona: Impact on the app market. 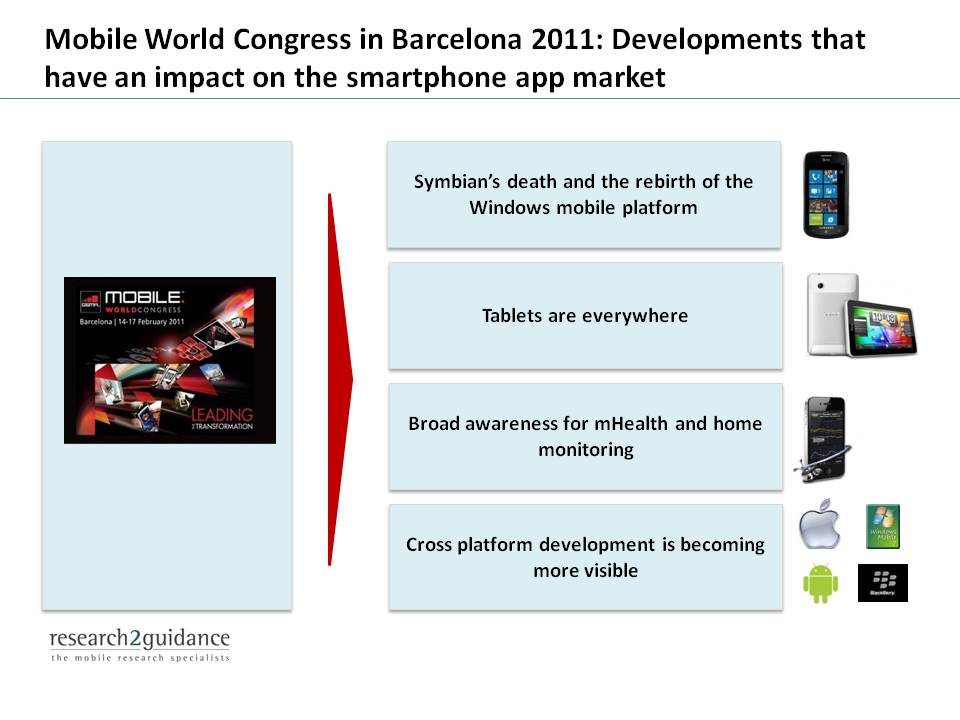 Symbian is dead long live Windows7: This is probably the biggest single piece of news to emerge from last week’s event. Windows 7 will be used as the primary OS for Nokia’s smartphone portfolio. According to Mr. Elop (Nokia CEO) there will be a two year transition time before all new devices are being shipped with the OS from Microsoft, but from our discussions with Microsoft and Nokia we realize that there is a large amount of pressure to make that period as short as possible, especially as it will become even more difficult to convince developers to develop for Symbian, a dead end platform. The co-existence of Nokia phones running on WindowsPhone 7, Symbian and MeeGo presents a challenge. The future of MeeGo seems to be very uncertain even though Nokia and Intel stated their intent to offer an alternative platform especially for non smartphone devices. Windows 7 will definitely become a very interesting platform for developers in the future. If it will meet the expectations of those two giants is not clear just yet.

All major and quite a few smaller OEMs presented their answer to the iPad. They were probably the most touched and intensively tested devices at the MWC. Apple created this new market and sold almost 15 million iPads in only 9 months. Not many analysts forecasted this tremendous success (including us). Samsung unveiled the Galaxy Tab’s successor the Galaxy Tab 10.1 based on Android’s avatar for tablets: Honeycomb. LG, HP, HTC, Motorola, RIM, Lenovo and Toshiba all announced devices at the MWC 2011. RIM plans to release its super Playbook’s WiFi version late in Q1 2011, and HSPA+ and LTE, office software capability, multitasking OS, along with Flash, HTML5 and open internet standards in H2 2011. HP also unveiled Touchpad, a webOS based tablet. ZTE will accelerate its expansion on smart devices by launching lightweight tablets based on Honeycomb which will be due in Q3 2011. Malata, a smaller Chinese vendor, only showed its portfolio of tablets in Barcelona. What it shows: There will be hundreds of tablets launched by the end of 2011. It is going to be the year of the tablets. Make sure your apps look good on them.

Broad awareness for mHealth and home monitoring: mHealth was clearly the biggest cross industry topic on the conference. Most of the OEM and operators as well as big fishes like Qualcomm and IBM showed some of their solutions which make use of a mobile device to support the treatment of a patient. Interesting that most of the mHealth solutions where not smartphone centered but made use of a specific device. Only smaller players which showed their solutions in the health care pavilion where mainly smartphone focused. Home monitoring has been another interesting cross industry area which caught a lot of attention during the week. Telco companies used an entire pavilion, the “Embedded House”, to showcase their offerings. It became clear that the Telco industry will compete against the energy industry in that promising market.

Cross platform development is becoming more visible: It is clear that in the next years developers will face increasing challenges in developing apps for multi app platforms. There are some promising cross platform development tools and platforms out there which should gain more attention in the near future. There are a growing number of companies concentrating on those services such as Service2Media, Mobile Distillery, ideas2mobile and Geniem. Another interesting concept that showcased at the event is Kinoma by Marvell. This could be described as an app store within an app store. Marvell claims that apps running in the Kinoma environment must be developed only once and work on Android and Windows 7 operating systems.

Please feel free to comment and share your views on what are the major trends highlighted on during the MWC in Barcelona this year which impacts the smartphone app market.