Cross-platform tools could improve app developer margins by 800m USD per year, but only a minority of developers are aware of the potential

Currently around 750,000-800,000 new apps are being published per year on major app platforms (iOs, Android, BlackBerry and Windows Phone).  Around 8% are rather easy multi-platform apps which wouldn’t need native app features of mobile platforms (apps that are being published on at least 2 platforms in the same year and that are not “high end“ apps). Thus 65,000 app projects could be supported by cross-platform tools. Based on an average app project size of US $ 38,000 (see “The Market for Mobile Application Development Services 2015”) the market value for these projects is US $ 2.4bn per year. Users of cross-platform tools report a significant efficiency gain of around 30% that could result in higher margins (in total US $ 800m per year) or additional app projects.

The question is why app developers don’t make use of these tools more frequently. One of the reasons is that most of the tools are simply not known. This is one of the results of the global “Cross Platform Tool Benchmarking 2013” report.

The tool market has just become so crowded that selecting the right one is a project on its own. The increasing number of CP Tools has made it difficult for new solutions to raise awareness among the app developer and publisher community. As a result, only 11 CP Tools out are known by more than 20% of the app community. 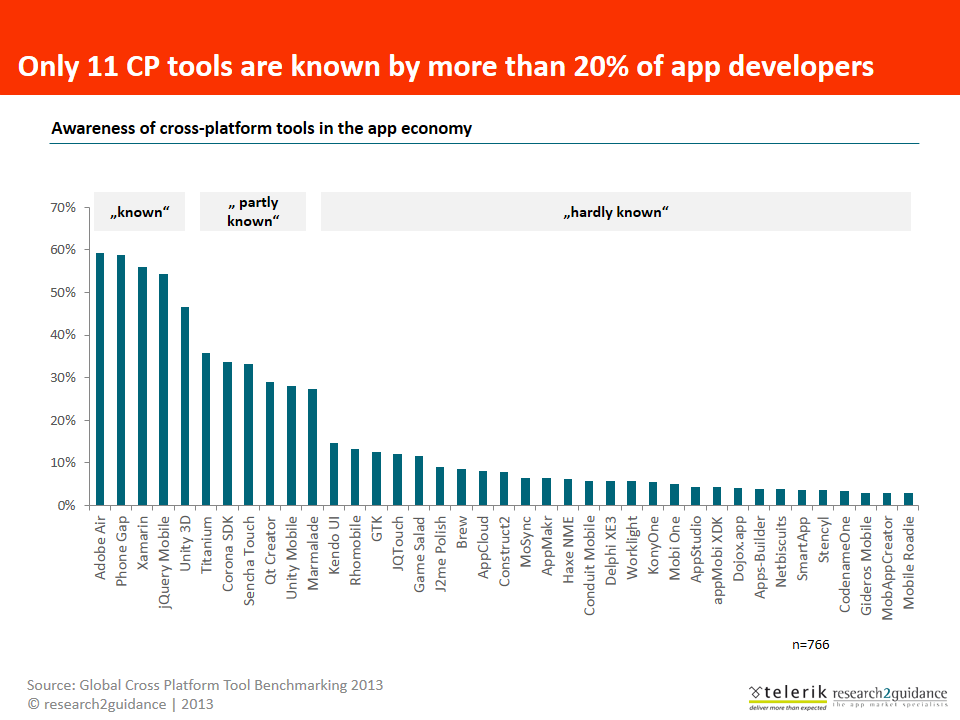 Even though developers might want to make use of these tools, their potential clients are reluctant. As a developer phrased it in research2guidance’s global survey: “Even if I know what Cross-Platform Tools are capable of doing, my clients don’t know. I would love to get some help in selling projects using these tools.”

We are interested in getting your feedback on cross-platform tools. Why do you think the adoption rate is so low?